Statistics and interactive maps tracking turnout and registration in the 2020 elections, including analysis of how city elections changed during the COVID-19 pandemic. 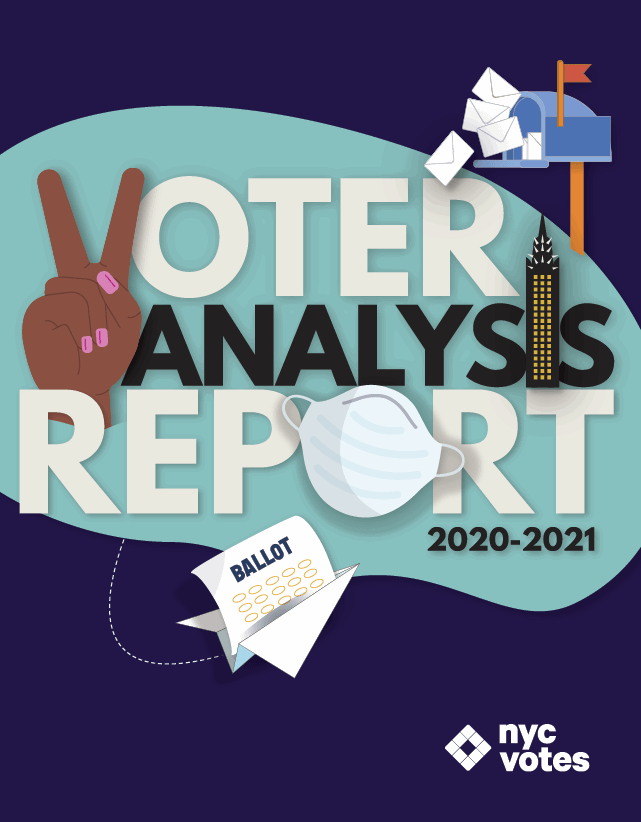 The Voter Analysis Report for 2020-2021(released April 30, 2021) includes comprehensive analysis of the 2020 presidential election year, conducted during a once-in-a-century pandemic and policy recommendations to expand access to voting and improve future NYC elections. The tabs on this page include an executive summary and interactive maps, providing additional context for the full PDF report.

The 2020 election year was dominated by media coverage of the presidential race and mitigating the effects of the COVID-19 pandemic. For the most part, elected officials and election administrators rose to the occasion and New York City voters were resilient and found a way to safely vote in spite of these challenges.

For the first time ever, all voters were able to vote by three ways: by mail, early in person, or on Election Day.

Staten Island, which had the lowest voter turnout in the primary election (20.6%), turned out to vote at a high rate in the general election, at almost 70.0%. Turnout disparity can still be seen from a community district level, where the turnout difference between the highest and lowest turnout community districts continues to be about 25.0% in both the primary and the general elections. 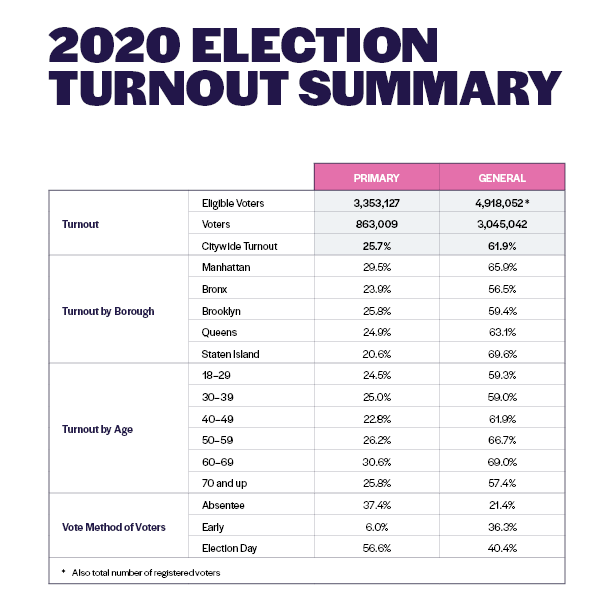 In presidential election years, voters aged 18 to 29 generally have higher turnout than they do in non-presidential years; in 2020 we also saw an increase in voter turnout compared to the last presidential year. Turnout for this age group increased by 3.4% from the 2016 to the 2020 general election. The youth turnout trend was observable across the entire country, with total national youth turnout estimated to be between 52% to 55% percent nationwide, an increase of about 8% compared to 2016. Total turnout in the 2020 general was 61.9%, representing a slight increase of 1.6% over 2016’s turnout of 60.3%.

Analysis: Who is early voting?

The 2020 general election was the second general election cycle with early voting available, which allowed us to look more closely at the characteristics of voters who vote early, using information readily available in the City’s voter file.

We will continue to perform additional analysis of the characteristics of early voters and what might drive them to vote early versus on Election Day or by absentee.

How we responded to COVID-19

We entered 2020 expecting it to be an historic election year in terms of voter turnout, with a highly anticipated presidential election following several years of increasing voter turnout. Like many doing voter engagement across the city, our previous work was heavily reliant on in-person organizing. Our plans were quickly disrupted by COVID-19 which made it unsafe to conduct in-person activities and also drove uncertainty around election dates and voting methods. In short order, we had to pivot our strategy to adapt to the circumstances of the pandemic.

Some of the things we changed this year:

Election year 2020 pressure-tested elections administration in New York State and New York City while also providing more ways to vote than ever before. Our policy recommendations focus on making improvements to flawed existing procedures that were laid bare in 2020, in some cases because it was the first time to be tested on such a massive scale and proved inadequate to the emergency measures that needed to be taken. Our legislative recommendations focus on continuing the important work begun by the State government in 2019 to modernize New York State Election Law.

Expanding Access to the Polls: Voters with Limited English Proficiency

In New York City, 858,385 citizens of voting age population are Limited English Proficiency (LEP), defined by the Census Bureau’s American Community Survey as speaking English less than very well.[i] Research indicates that major public institutions, including healthcare and education systems, are ill-equipped to accommodate the needs of people with LEP.[ii] This leads to larger barriers LEP speakers face when trying to understand and access the services they need when navigating these systems.[iii] Access to the ballot for LEP individuals has grown over time but has ample room for improvement.

Section 203 of the Federal Voting Rights Act (VRA) requires counties to provide translation and interpretation services to large populations of Asian, Native American, and Alaskan Native language speakers as well as Spanish speakers if there are more than 10,000 speakers of a language or the community makes up over 5% of that county’s population. This measure tries to combat the history of exclusion of those communities from the political process.

In accordance with Section 203 of the federal VRA, the City BOE serves Spanish, Bengali, Chinese, and Korean speaking communities with translated voting materials and interpreters in certain election districts within certain boroughs. They also serve Hindi speaking communities in Queens with interpreters and try to hire Hindi interpreters who also speak Punjabi when possible. However, out of 1.7 million limited English proficiency (LEP) speakers in New York City, over 300,000 do not have access to election materials in their native languages, because they speak a language not covered by the VRA.[iv]

Translated registration forms may help LEP voters get registered but those voters may not feel comfortable casting their vote without support in their preferred language. Additionally, CEC interpreters were only available at select locations and on three out of the total ten days for early voting and Election Day. This patchwork of policies does not ensure a uniform level of service for LEP voters. Support for LEP voters in New York City should be consistent throughout the voting process and include targeted outreach to ensure LEP communities know where and how to access these translated resources. 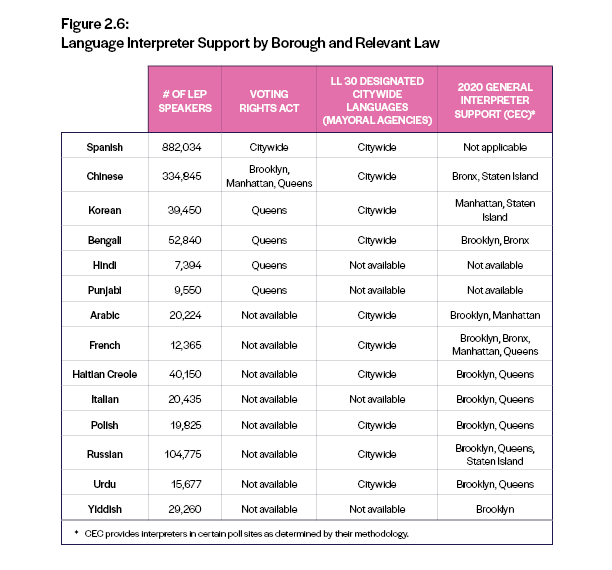 Local Law 30-2017 requires agencies that provide direct services to the public to translate widely disseminated materials in the ten designated citywide languages. However, the City BOE does not fall under this requirement since it is governed by New York State Election Law and constituted under the New York State Constitution.[vi] For this reason, passing state legislation is the most effective way to ensure that voters have consistent access to translation and interpretation services throughout the voting process.

Recently, Senator Zellnor Myrie introduced the John R. Lewis Voting Rights Act of New York, which contains a section that seeks to improve assistance for language-minority groups.[vii] If over 2% of voting-age citizens, or over 4,000 voting-age citizens, in an election district speak English “less than very well” and speak the same language, the BOE is required to provide translation and interpretation services in that language. The bill specifies that notices, registration forms, instructions, assistance, and ballots must be available in that language as well as any materials relating to the electoral process. For languages that are oral, unwritten, or historically unwritten, the bill allows the BOE to provide only verbal information and assistance.[viii] 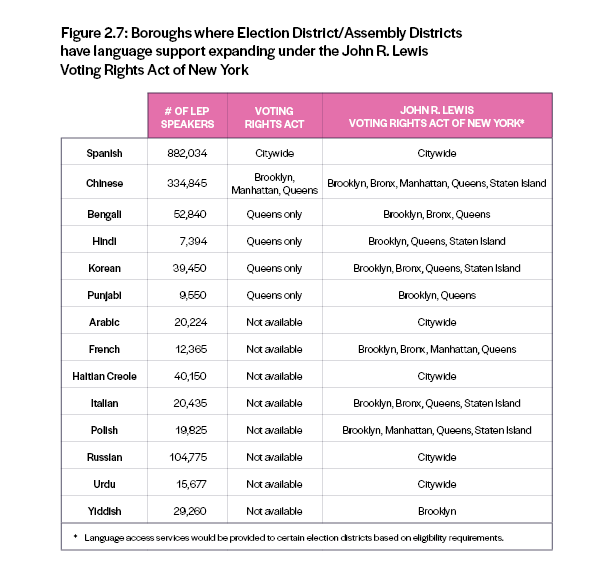 As shown in Figure 2.7, language support would significantly expand under the John R. Lewis Voting Rights Act of New York.  The map in Figure 2.8 illustrates which  election districts would provide voters with more language support if this bill becomes law. As shown, Russian and Haitian Creole speakers, the two most widely spoken languages in New York City that are not covered by the VRA, serve to benefit the most from this bill. The other designated citywide languages (Arabic, French, Polish, and Urdu) also would be covered.

As stated in testimony provided to the State Senate Elections Committee in March 2020, NYC Votes strongly supports passage of the John Lewis Voting Rights Act of New York, as these changes will benefit communities across the City that currently do not receive the voting services they need and deserve.[ix] Providing interpretation services and translating election materials into more languages for underrepresented groups is essential to increasing participation in our democracy.

However, it is not enough for the Voting Rights Act of New York to require the City BOE to provide interpreters and translations. These services must also be accurate, reliable, accessible, and easy to understand. The Department of Justice has identified accurate translations as a key to a successful language access program, as poor translations can mislead voters. In order to ensure that translated voting materials are helpful for voters, the BOE should create a Language Accessibility Advisory Committee modeled after the one that exists in Los Angeles County. Their Advisory Committee is made up of non-profit and community groups whose memberships include LEP voters. Their role is “providing expertise on reviewing election materials in the identified languages” as well as promoting translated material and giving feedback on interpreters and translation services.[x]

The BOE should also implement best practices when incorporating new language support by using the dialects understood by voters in the city and rely on plain language to include as many low-literacy voters as possible. The Center for Civic Design, through their language access research, has created a guide for interested jurisdictions to follow when incorporating more languages into their voting materials. The organization recommends maintaining a consistent layout and using visuals to indicate different languages. These guidelines guarantee that voters are easily able to find the language they prefer and understand the translation when they read it.

Though these recommendations maximize usability, they present a real challenge to the City BOE for disseminating information to the hundreds of thousands of additional voters who would be covered under the bill. In addition to hosting translated materials on their website, the Board should implement a Voter Assistance Hotline similar to the system already in place in Los Angeles County to ensure they are able to reach LEP voters from multiple angles. With a Voter Assistance Hotline, the City BOE would be able to fulfill requests from voters for printed translated election materials without having to mail these materials across the city. Akin to how the hotline operates in Los Angeles County, this number can also serve as the space where voters can hear about registration and voting information in the language of their choice.

As stated before, the City BOE is not required to produce its voting materials in the ten citywide languages. Neither is the CFB. As an independent board, we do not fall under the category of mayoral agency designated by Local Law 30 of 2017. However, we recognize that if voters are to receive translation and interpretation services at every step of the voting process, NYC Votes must also be included. In the best interest of voters, we commit to following the guidelines presented in the City’s language access plan and providing its commonly distributed materials in all the designated citywide languages as soon as practicable.[xi]

[xi] To accomplish this goal, the CFB will request a special data set from the Census Bureau with data on LEP speakers broken down by election district. With this data set, we can better understand the impact of changes to voting and develop more accurate recommendations in the future.