The Campaign Finance Board is a nonpartisan, independent city agency that empowers New Yorkers to make a greater impact on their elections.

The New York City Campaign Finance Board (CFB) administers one of the strongest, most effective campaign finance systems in the country. NYC’s matching funds program amplifies the voice of average New Yorkers in city elections by matching their small contributions with public funds. By increasing the value of small-dollar contributions, the program reduces the possibility and perception of corruption from large contributions and unlimited campaign spending, and encourages citizens from all walks of life to run for office. Through its rigorous oversight and enforcement efforts, the CFB holds candidates accountable for using public funds responsibly.

The CFB publishes detailed public information about money raised and spent in city elections by candidates and independent spenders, bringing greater transparency to the democratic process. Its NYC Votes campaign engages and educates voters through community outreach, the Voter Guide, and Debate Program, empowering New Yorkers to make informed choices at the polls. In addition, the CFB seeks to improve the voter experience by advocating for legislative changes to the registration and voting process. 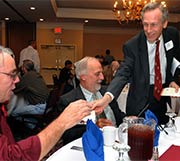 History of the CFB

The CFB’s core mandates have grown and the landmark campaign finance program has evolved significantly since 1988.

The nonpartisan Board is composed of five appointed members who serve five-year terms.

CFB staff assist candidates, engage and educate voters, publicize how money is raised and spent in local elections, and more.

The nine members of VAAC advise and assist the CFB with its voter engagement efforts.

See all CFB events, meetings, trainings, deadlines, and election dates. Filter to find the dates most important to you.

Interested in working for the CFB? Join our team and help make NYC elections fairer.

View open opportunities and learn about the bidding process for new projects.