Adam says
he wanna be Jay-Z
Young Joc
Young Jeezy
Rick Ross
The Boss
T.I.
or B.I.G.
as long as he’s Somebody
if it takes block hugging
or rock bottom
like his daddy.
Ishah says
Jenny thought she was from the block
until Jenny met me.
Ishah is three.
Got a dream to be discovered
on Living Color
Harlem Puerto Rican Princess
and Senegalese.
Adam don’t know what the east side of 143rd looks like
and doesn’t care to see.
Kaseem
caught on the courts
of Morning Side parks
between two-fifth and tomorrow maybe
a basketball baby
gives 23 a run for his money
in his 23s always running from his mommy.
Prodigies the next Hova or Kobe.
And Khadim
almost fourteen
says he wanna be the power his papa
steals for his mama
with a presence that
makes people get quiet
in reverence says
I wanna be respected
not like Pun or Pac
ball bouncing
or hugging the block
but President pops
off the lips quite nice. 2035
President pops off the lips
just fine. 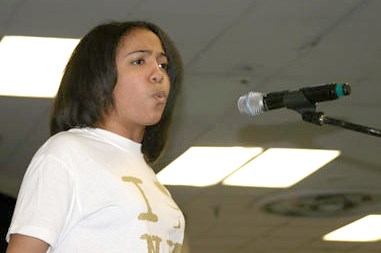 Zora Howard is a Harlem-raised writer, spoken word artist, actress, and activist. Ms. Howard was a member of the 2006 Urban Word NYC Slam Team, which placed second at the Brave New Voices Youth National Slam. She was also the 2008 first place winner of the New York Knicks Poetry Slam. Ms. Howard has performed at such venues in New York City as the famous Apollo Theater, the Brooklyn Academy of Music, and the Bowery Poetry Club. Her performance work has allowed her to travel to nations around the world such as the countries of Germany and Brazil. Filmmaker Lisa Russell won an Emmy for Outstanding Advanced Media Interactivity for the short film “Biracial Hair”, which was based on Ms. Howard’s original poem of the same title.

Her work has also been showcased on HBO, PBS, and NBC. In 2009, she was named the first NYC Youth Poet Laureate by the NYC Voter Assistance Commission.