Statistics and interactive maps tracking turnout and registration in the 2021 elections, including analysis of how voters used ranked choice voting throughout the city. 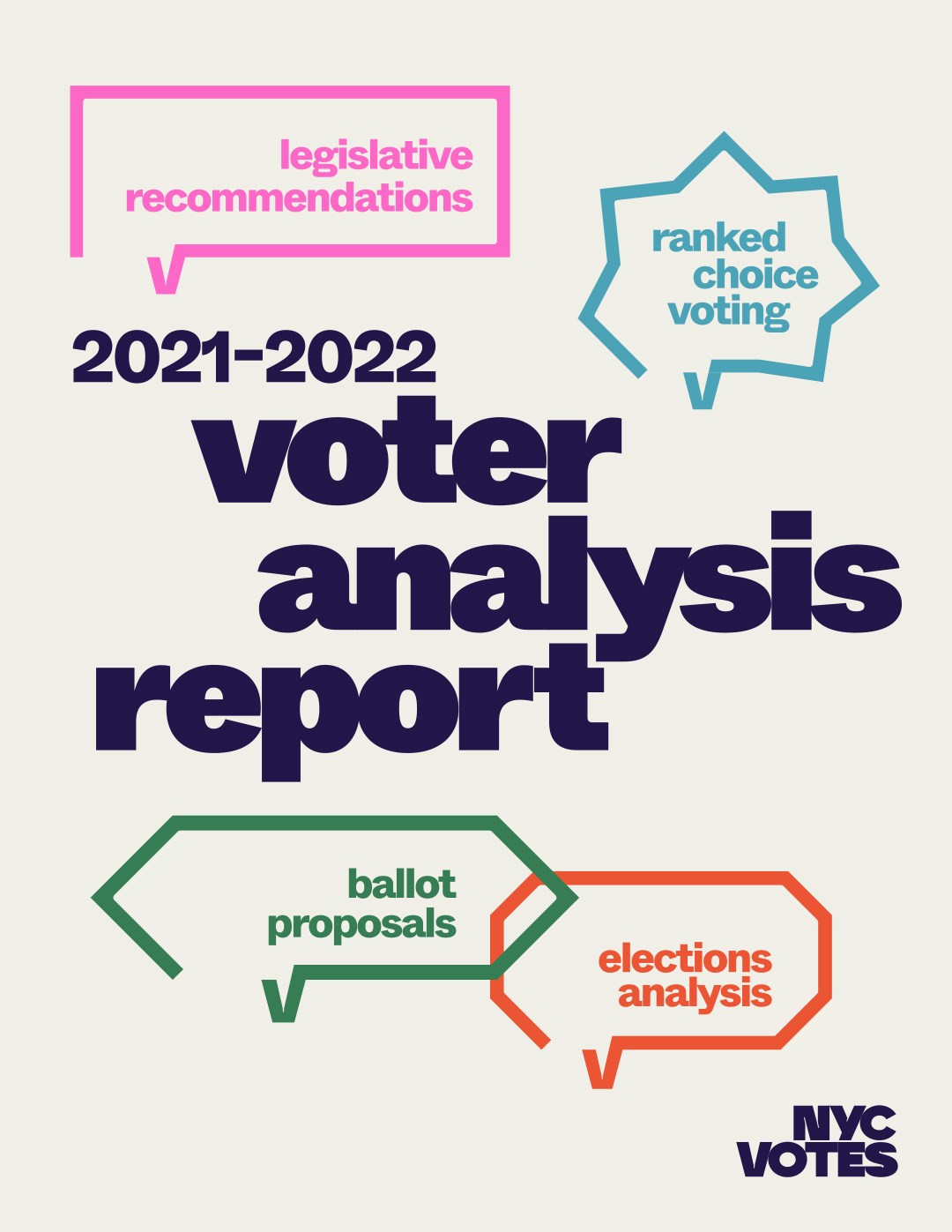 The Voter Analysis Report for 2021-2022 includes comprehensive analysis of the 2021 city election year, an analysis of the first ever ranked choice voting elections in NYC, and policy recommendations to expand access to voting and improve future NYC elections. The tabs on this page include an executive summary and interactive maps, providing additional context for the full PDF report. Read the Voter Analysis Report.

Ranked choice voting was the big election story in the first half of 2021, when it was used for the first time ever in NYC. Voters largely embraced it during four special elections for City Council in February and March, and in a citywide primary election in June. 88.3% of voters ranked more than one candidate for at least one office on their ballot.

The story in the second half of 2021 was ballot proposals. November’s general election featured five ballot proposals, including three voting reforms which would have amended the redistricting process, given voters more time to register to vote, and allowed more voters to vote by mail. All three voting reforms failed statewide, despite having majority support in NYC. Two other proposals–granting the right to clean air, clean water, and a healthful environment and reforming NYC civil courts–passed with strong support citywide and statewide.

Throughout the year, turnout reached both historic highs and lows. The primary election had the highest voter turnout rate of any mayoral primary in the last several decades at 26.5%. However, the turnout rate fell in the general election to a historic low of 23.3%.

Ultimately, NYC voters elected a new Mayor and the most diverse City Council in history. The incoming class includes NYC’s first ever majority-female City Council. For the first time, it will also include Muslim, Korean, and South Asian Americans, as well as its first openly LGBTQ Black female members.

2021 marked the first time NYC voters used ranked choice voting (RCV) for the offices of Mayor, Public Advocate, Comptroller, Borough President, and City Council in primary and special elections. Voters could rank up to five candidates for each office, instead of choosing just one.

Our agency was tasked with leading educational efforts to ensure that voters had all the info they needed to rank their ballots. We designed a communications strategy that aimed to drive voters to resources about which candidates were running for office and how they could use ranked choice voting to express their preferences.

Voters overwhelmingly chose to rank their preferences. 89.3% of Democrats and 56.6% of Republicans ranked multiple unique candidates in at least one race. Republican voters ranked at a lower rate because the Republican mayoral race had fewer candidates, which aligns with our findings. See how many New Yorkers had the same ranking as you on their mayoral ballot!

RCV didn’t go off without a hitch, though. Initial results were tabulated by hand for the first ranked choice special elections in February and March. Then for June’s primary, the city Board of Elections (BOE) responded to public concerns about timely results tabulation by initially releasing the first round of RCV votes from ballots cast in-person. However, the results were incorrect and accidentally included over 135,000 test votes. This is why one of our recommendations for future RCV elections includes publicizing a results schedule.

Despite these hurdles, the average voter used more than half of their available rankings, indicating widespread use and clear enthusiasm for ranking their preferences.

Of the 31 total recommendations in the past three Voter Analysis Reports, 13 have been passed into law and 11 have already been implemented. Here are a few past recommendations: