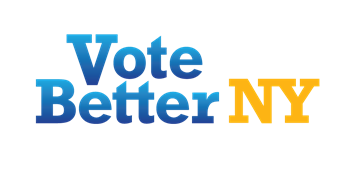 On Thursday, a coalition of civic groups and citizen advocates launched the Vote Better NY petition calling on lawmakers in Albany to adopt essential voting reforms that will take down barriers to the ballot box. With the presidential election only two years away, state lawmakers must act now to ensure that all eligible New Yorkers can register to vote and cast a ballot that counts on Election Day in 2020.

"All across the country, we're seeing a swell of interest in getting involved in the democratic process, but here in New York our outdated voting laws hold us back from getting more people registered and to the polls on Election Day," said Onida Coward Mayers, Director of Voter Assistance for the NYC Campaign Finance Board, whose voter engagement initiative, NYC Votes, is coordinating the petition drive. "It's time for our leaders in Albany to implement key voting reforms that will make it possible for more New Yorkers to participate in their own elections."

Over the coming months, the Vote Better NY coalition aims to collect upwards of 5,000 signatures on the petition. On Tuesday, May 8th, volunteers will deliver these signatures to the governor, the state Senate majority leader, and the Assembly Speaker to demonstrate that this issue matters to voters across New York.

Amy Loprest, Executive Director of the NYC Campaign Finance Board, said: "Early voting will provide the priceless and essential right to cast a ballot to more New Yorkers at a cost that represents a tiny fraction of the New York state budget. We need our legislators to realize that the benefits of widely used practices like early voting are well worth the investment."

Chanel Turnquest, NAACP Syracuse Chapter, said: The Voter Empowerment Act and the New York Votes Act will make it easier for young people to get involved in the political process. When registering to vote becomes more easily accessible, young people can focus on being engaged instead of figuring out how to get engaged, politically."

Meghan Cobane, Democracy and Voter Empowerment Coordinator for New York Public Interest Research Group, said: "Voting is one of our most fundamental rights, but the current laws in New York State make it difficult for many people, including students, to vote. Reforming the system to make it easier to register and vote through automatic voter registration and early voting will empower voters, rather than disenfranchise them."

Kristen L. Rouse, U.S. Army Veteran and Founding Director of NYC Veterans Alliance, said: "Throughout our history, New Yorkers have led the way in expanding the right of all citizens to vote, and countless New Yorkers since 1776 have served and sacrificed to defend American democracy. New York should lead, not lag behind, in voter access and protections. New technologies should make it easier than ever to vote, from service members abroad receiving absentee ballots on time to military families moving from place to place—or any New Yorker struggling to balance the demands of work, family, and engaged citizenship. The NYC Veterans Alliance is a proud partner of Vote Better NY to strengthen and protect our most sacred right as citizens—the right to vote."

Eduardo Cuesta, New York Director of Dominicanos USA, said: “Voting should be accessible to all those who qualify, yet the state of New York remains far behind other states when it comes to the modern vote. Dominicanos USA is a proud partner of NYC Votes, working towards voting reform together. It is our duty to ensure that New York voters are able to partake in the 2018 state and federal elections. Early voting, automatic voter registration, and same-day voter registration are among the reform we believe will empower New York voters as they strive to exercise their civil rights. Dominicanos USA is committed to advancing civic engagement within the Dominican and broader Latino communities, thus promoting and ensuring democracy in America."

Zoe Davidson, Alex Lehman, and Bryson Wiese, Co-Founders and Executive Directors of Coalition Z, said: “Although many high school students are too young to vote, we can still lobby to ensure that when we turn 18, voting is simple and accessible enough that our peers can form lifelong civic habits.”

For more information about Vote Better NY, please contact the NYC Campaign Finance Board by sending an email to press@nyccfb.info.