Today, on the 5th annual Voter Day, the Vote Better NY coalition calls on state lawmakers to remove New York's barriers to voting and increase access to the ballot box. Over 100 citizen advocates are meeting with lawmakers today in Albany to share their personal voting experiences and make the case for reforming New York's election laws, which are among the most restrictive in the country.

No one should be prevented from exercising their right to vote because of outdated, discriminatory laws, and every eligible New Yorker should be able to register to vote, have more than one day to get to the polls, and cast a ballot that counts.

Vote Better NY thanks the members of the State Senate and Assembly, listed here, who have already signed onto these bills.

“Voting is one of our most sacred rights as U.S. citizens. Yet, here in New York, our outdated election laws make it far too difficult for New Yorkers to exercise that right. An overhaul of our election laws is long overdue. State lawmakers must do their jobs and make elections work for the people who matter most—the voters.” said Onida Coward Mayers, Director of Voter of Voter Assistance at the New York City Campaign Finance Board. 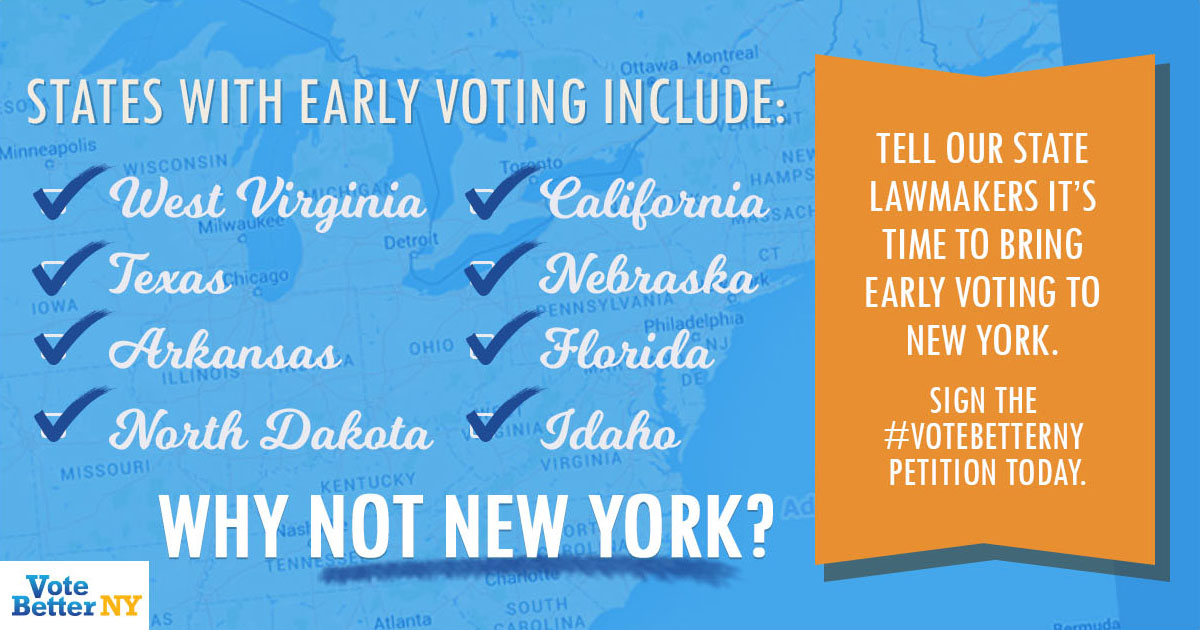 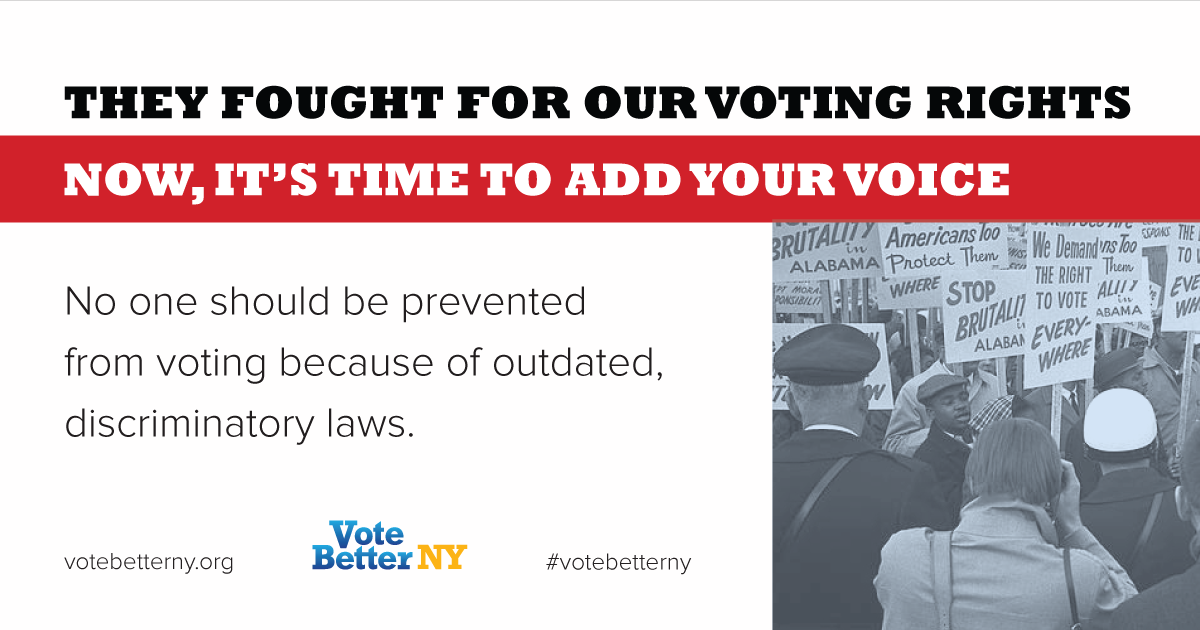 “We need to fix New York’s broken democracy by making it easier for citizens to vote. I am proud of the Senate Democratic Conference’s efforts to reform our state’s election laws to enable early voting and no-excuse absentee voting, cut red tape, and ensure that more New Yorkers are able to exercise their Constitutional right to vote. With supporters like Vote Better NY, I know we will succeed in reforming our election laws and strengthening our democracy,” said Senate Democratic Leader Andrea Stewart-Cousins.

“Every eligible New Yorker should be able to register to vote, cast a ballot, and make their voice heard, but our outdated election laws put too many hurdles in the way. Barriers abound—and our democracy suffers,” said State Senator Brian Kavanagh, ranking Democrat on the Elections Committee and Sponsor of S7400A to enact and fund early voting. “The simple truth is that when more New Yorkers are able to vote, our elections—and our democracy—work better. It’s unconscionable to continue disenfranchising voters simply because they have other commitments like work, school, childcare, or long commutes. Today, I’m recommitting to working with the Vote Better NY coalition and my colleagues to make our elections, from registration through counting the ballots, as free and as fair as possible.”

“At a time in our country when voting rights are under assault, New York must live up to its reputation as a progressive leader,” said  Senator Michael Gianaris. “Access to the ballot box should be easy and fair. I urge my colleagues to enact these proposals as soon as possible to remove obstacles to voting.”

“The measures approved by the Assembly would strengthen our electoral process by ensuring voter accessibility, facilitating participation, and improving transparency in campaign financing. Our democratic process is dependent on our ability to ensure that New Yorkers are able to exercise their fundamental right to vote,” said Assemblymember Charles Lavine.

“We live in a state that came in 41st out of 50 states for voter participation in 2016. Making voting more accessible and convenient will bring more New Yorkers to the ballot box. Early voting is something that we need in New York so that everyone’s voices are heard at the polling sites. People should not have to choose between working and voting,” said Assemblymember Latrice Walker.

“New York's voter participation rate is lousy and the state has been one of the worst in the nation for a long time. Once again, New York seems incapable of dealing with its democracy crisis. It's time for New York's top elected officials to make voting reforms 'Job 1' for the end of this session,” said Blair Horner, Executive Director of NYPIRG.

“New Yorkers deserve a modern voting system that works for them, not against them. Access to the ballot is a fundamental right for all citizens, and it is time for our elected officials to expand that access for the voters,” said Eddie Cuesta, Executive Director, Dominicanos USA.

“When we served in the United States Armed Forces, we swore to uphold and defend the U.S. Constitution, even placing our own lives at risk for the sake of American democracy. As veterans, there is no more sacred duty than ensuring our democratic processes are strong, accessible, and fair in the city and state we call home. NYC Veterans Alliance members— veterans, family members, and civilian allies alike—are proud to stand with the Vote Better NY coalition to demand reforms in our state's election laws,” said Kristen L. Rouse, U.S. Army Veteran, Founding Director of NYC Veterans Alliance.

“While most states are making leaps and bounds to increase access to the polls, New York remains home to some of the most restrictive election laws in the country. It’s up to state lawmakers to remove those barriers to the ballot and give New Yorkers the kind of elections they deserve,” said Meredith Henderson, North Atlantic Regional Director of Alpha Kappa Alpha, Sorority, Inc.

“America is watching as students walk out, march, and make their voices heard. Now, it’s up to New York to make sure we can take the next step: voting. Our generation, Generation Z, is coming to the ballot box and we will not be silenced,” said Alex Lehman, Bryan Wiese, and Zoe Davidson of Coalition Z.

“New Yorkers are busy people. They should not have to choose between exercising their right to vote and fulfilling personal obligations. That’s why New Yorkers deserve the same flexibility that voters in 37 states already have—early voting. SAFEST is proud to supporter Vote Better NY and its efforts to make New York the 38th state to pass early voting,” said Mazeda Uddin, Founder and CEO of South Asian Fund for Education, Scholarship and Training (SAFEST).

“I have launched a moral campaign to ensure that our residents understand the value of being civically engaged through voter registration and voting in all elections. I applaud the efforts of Vote Better NY in taking this important message of change to our state officials,” said Reverend Walter Silva Thompson Jr., Senior Pastor of Calvary Baptist Church in Hampton, NY, and leader of VoteHamptonNY.

Learn more about Vote Better NY at www.votebetterny.org. Follow VBNY events and join the conversation with the hashtag #VoteBetterNY.