The winner of the city's premier youth poetry program is a 'fierce advocate' for women, immigrants, and minorities. 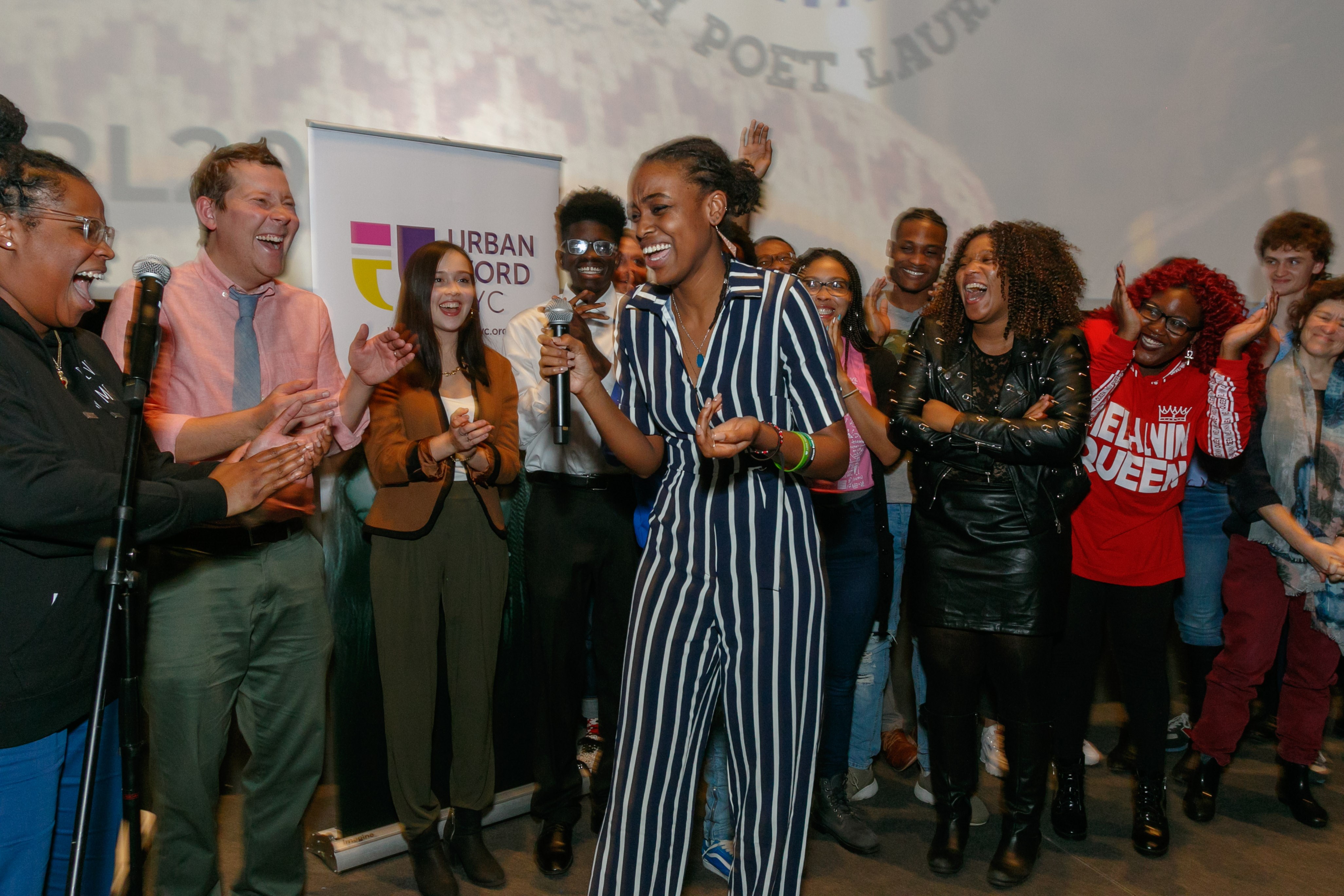 Camryn Bruno earned the NYC Youth Poet Laureate title on Nov. 5, 2018. Bruno will work with Urban Word NYC and NYC Votes to perform her poetry at events around the city throughout the next year. (NYC Votes)

New York City's premier youth poetry program has crowned its 2019 Youth Poet Laureate (YPL): Queens native, Camryn Bruno. As YPL, Bruno will tour the city throughout 2019 to perform her own poetry and inspire her peers to get more civically engaged.

"I'm truly honored to be selected as the next Youth Poet Laureate for New York City," said Bruno. "I'm looking forward to working with both Urban Word NYC and NYC Votes to reach a broader audience through my poetry, and to further encourage youths of New York to understand the effects that voting and social change—or a lack there of—can have on our everyday lives."

Bruno is a first-year student at CUNY York College. She spent much of her childhood growing up in Trinidad and Tobago, and she is a multiple-time participant at Brave New Voices, the largest youth poetry slam in the world. She is the recipient of several literary and leadership awards including the 2015 Zelma A. Cowie Award for Civic Mindedness, the Ms. Tobago Heritage Personality Competition, and several Trinidad and Tobago National Literary Youth Awards.

Bruno describes herself as a fierce advocate for the rights of women, immigrants, minorities, and other historically silenced groups. She is already working on her first full length collection of poems, and as part of the YPL program, Bruno receives a book deal to publish her poetry.

To schedule an interview with the 2019 NYC Youth Poet Laureate, or to have her appear on air, please contact NYC Votes at press@nyccfb.info.

Watch the video and read the transcript of Bruno's voting-themed poem below. 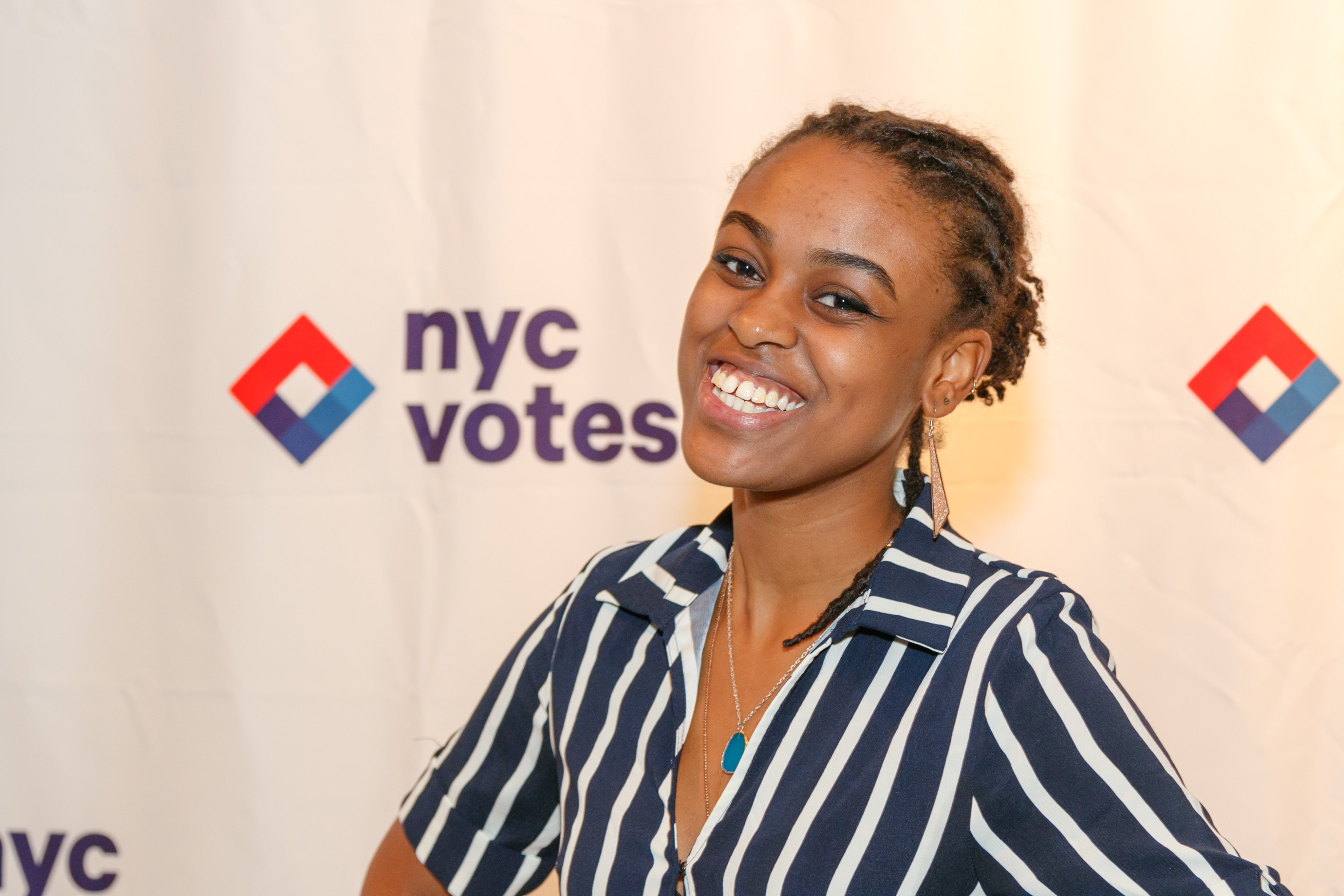 ABOUT THE YPL PROGRAM
On the evening before the 2018 midterm elections, thirteen young poets came together to perform before a live audience inside the Intrepid Sea, Air & Space Museum in Midtown Manhattan. Taking on today's most pressing issues, each poet recited two poems; one written about a topic of their choice, and another about voting and its connection to their everyday lives.

For three weeks, the poets worked on their writing and performances with Urban Word NYC staff, and nationally acclaimed artists, actors and musicians at the historic Federal Hall National Memorial, in preparation for the commencement program. By the end of the November 5th show, Camryn Bruno would be nominated to serve as the NYC Youth Poet Laureate for the next calendar year, earning a highly-coveted book deal to publish her first poetry collection, and a platform to speak out publicly on the issues that matter most in her perspective.

The other poets who participated in the program and commencement event were Tiana Castro, Horane Daley, Muhammad Deen, Daleelah Jaleh, and Ricky Shrachan. The commencement program was hosted by Poet in Residence with Urban Word NYC Roya Marsh and acclaimed writer and Urban Word NYC Youth Mentor Jon Sands, who each shared their own poetry.

The 10th anniversary of the NYC Youth Poet Laureate program comes as a new generation of young people are discovering their political voices. For a decade, the program has helped lift the words of young leaders like New York City's 2018 Youth Poet Laureate and Stuyvesant High School junior William Lohier.

William Lohier performs his final poem as the 2018 NYC Youth Poet Laureate before passing the title to Camryn Bruno who will continue in Lohier's footsteps as an outspoken advocate for her generation. (NYC Votes)

The program was developed through a partnership between NYC Votes, the nonpartisan voter engagement initiative of the NYC Campaign Finance Board, and Urban Word NYC. The program is designed to identify young writers and leaders committed to creating change through civic engagement and literary excellence. It has since been replicated in 35 cities across the country.

"When we first created this program, we had no idea it would spread across the country," said Onida Coward Mayers, Director of Voter Assistance with the NYC Campaign Finance Board. "The fact that it has speaks to the YPL program's ability to connect young voters to the issues they care about, and the effects that elections can have on their lives."

"Initially I was blown away by the poets' willingness to tackle extremely difficult subjects," said Adam Falkner, Director of Special Projects with Urban Word NYC, who worked directly with each of the YPL program participants. "It's easy to take for granted what young people are paying attention too, or how much they care, and the YPL program really shows their natural ability to communicate their views in a creative format."

Did you know that ticks are common in the United States?
Well watch out!
Because they can be found in
-Grass
-Trees
-Shrubs
-The Government
Did you know that they’re attracted to humans and four legged creatures?
Once a tick bites you, it sticks around for a few  days
Potential symptoms of tick-borne diseases include:
-Red spots
-A full body rash
-Neck Stiffness
-Feelings of wanting to protest
To Shout “Not my President”
To march for your life
When you get bitten there would be
An infestation on your limbs
When you don’t use an action such as-
Insecticide or going to the polls
Your body would look like it has many bugs
Like Politics
So whether you’re a Human Independent
Or a blue D.O.G.
Or a yellow D.O.G.
Or a C.A.T.S
Politics would always come back to bite you
Makes you bite the bullet
Using the bullet to bite people
Piercing through skin
These poli-ticks would suck your blood
Oxygenated or not
Give you their infectious diseases and then tell you that healthcare is a privilege
Not a right. Right?
But they still manage to keep their host alive
So they can continue to be a pain
Blowing a dog whistle
And they still treat us like animals
But we could still use our K-9’s to enunciate our voices
Let your vote be heard
Bark as loud as you have to
For the underdogs would never hear
But the top dogs hear it loud and clear
Prevention is better than cure
So If you see your cousin scratching his ears tell him to scratch the ballot instead
Because a man without a vote is a man without Protection
And how the time tick tick tick tocks
the ticks out of their hiding spot
To bite you and whatnot
So when the sun goes down tomorrow,
And you didn’t protect yourself,
Don’t tell me that I didn’t warn you about the Plague
About parasitism in this society
About politics
Don’t tell me, You didn’t know you’re the host organism?
That they’re dependent on you?
Touche