'Vote for the City You Want': NYC Votes Launches Citywide Ad Campaign Encouraging Voters to Participate in the Primary and General Elections 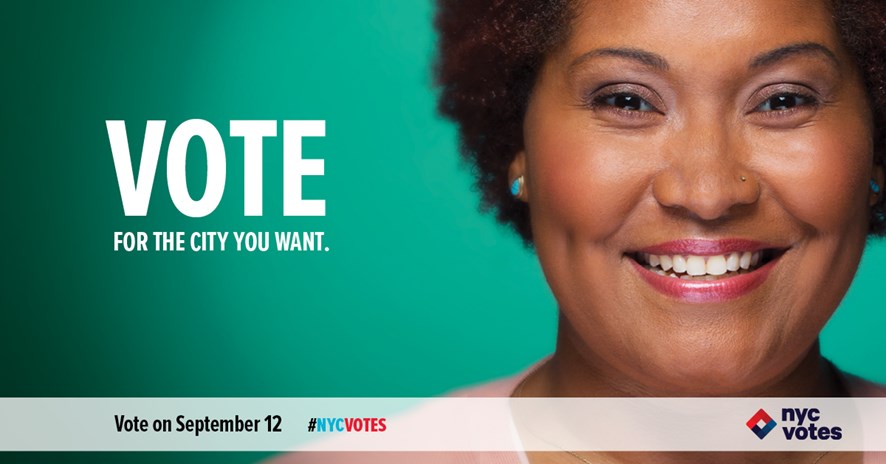 With the 2017 primary elections just weeks away, NYC Votes is launching a citywide promotional campaign encouraging New Yorkers to participate in our local elections.

The “Vote for the City You Want” ad campaign incorporates public opinion research on what motivates New Yorkers to participate in elections. The ads direct viewers to resources that educate and empower voters. The campaign also harnesses the pride New Yorkers have for their city, and highlights how local elections impact our daily lives – from the quality of our public schools, to the affordability of housing. Watch the videos in English and Spanish.

“New York City faces a voter turnout crisis although participation in our local elections is more important than ever,” said Amy Loprest, Executive Director of the New York City Campaign Finance Board, which oversees the NYC Votes campaign. “We know from public surveys and our hands-on interactions with voters that most New Yorkers are far from apathetic about elections. What they need and want is more information about who they are voting for, and how election results affect their daily lives.”

New Yorkers can connect with the campaign across various media platforms including television, online video, social media, newspapers, subways, buses, ferries, and local community spaces such as hair salons and neighborhood bodegas. The messages are available in the five languages covered by the Voting Rights Act in New York City: English, Spanish, Chinese, Korean, and Bengali.

The ads, created by DCF Advertising, feature a diverse cast of New Yorkers expressing how voting makes a real difference on the issues that matter most to New Yorkers. To help New Yorkers learn more, viewers are instructed to visit voting.nyc for everything they need to know about the upcoming election.

Voting.nyc is an online portal designed to answer New Yorkers' most pressing questions about their elections, including: what’s on the ballot, who the candidates are and what they stand for, where to vote, what your rights are as a voter, and what is the status of your voter registration record.

The “Vote for the City You Want” campaign helps voters cast an informed ballot with confidence in their decisions.