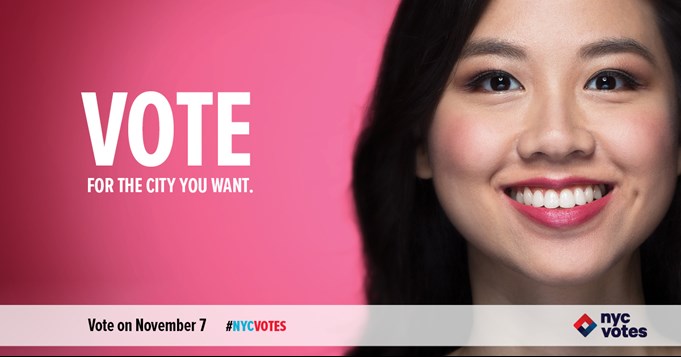 Today, NYC Votes launches a citywide campaign encouraging city residents to "Vote for the City You Want" in the general election on Tuesday, November 7th. The ads urge voters to connect with critical election resources that will help them cast an informed ballot: voting.nyc and the city's official Voter Guide.

The campaign highlights the impact that local elections have on issues like education, healthcare, affordability, mass transportation, job creation, and public safety. The ads direct voters to resources available through voting.nyc aimed at educating and empowering voters by answering their most pressing questions about voting, including what’s on the ballot, who the candidates are and what they stand for, where to vote, what their voting rights are, and whether or not they are registered to vote. The NYC Votes campaign draws upon public opinion research showing that city voters care deeply about local elections, but feel that a lack of information about those elections prevents them from participating fully.

"We know from our research and hands-on interactions with voters that there's an information gap that must be filled before substantial increases in turnout can be achieved," said Amy Loprest, Executive Director of the New York City Campaign Finance Board, which oversees NYC Votes. "Based on the numbers from the primary election, it's clear that we are effectively reaching the voting population in New York City through our promotional ad campaign, and that will be key in getting voters to the polls on November 7th."

The ad campaign, created by DCF Advertising, connects voting in local elections with making a difference on the day-to-day issues that New Yorkers care about and features models that reflect the diversity of New York City. Viewers may connect with the campaign across various platforms including cable television, streaming services, online video, social media, and print ads in newspapers, subways, buses, ferries, and local community spaces such as hair salons and neighborhood bodegas.

Keep an eye out for this important public service campaign on your morning commute and all other available platforms. NYC Votes urges community and civic groups to help amplify its get out the vote message by downloading the files and sharing them on social media.