NYC Votes and Urban Word NYC are excited to announce that Sharon Lin will be the New York City Youth Poet Laureate (YPL) for 2017. Lin delivered the winning performance of her original poem, “A Footnote on a Hollywood Blockbuster” at the eighth annual YPL spoken word competition on December 17th at the New York Public Library in the Celeste Bartos Forum. 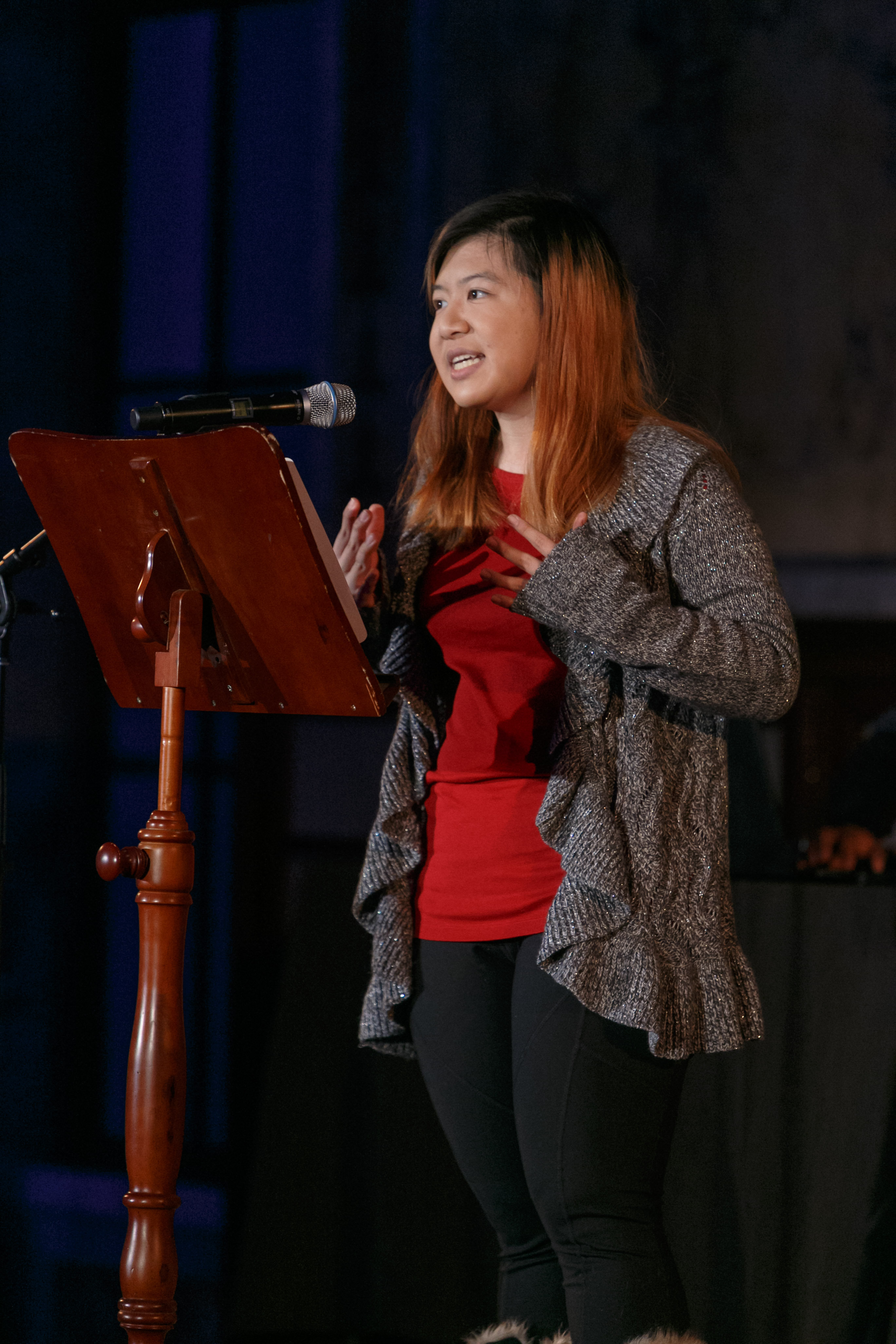 Lin is an 18-year-old senior at Stuyvesant High School. She has been named a White House Champion of Change, a Turnitin Global Innovation Award Winner, and a Scholastic Art & Writing Award Winner. Her writing has appeared in WHITETEETHMAG, Muse Magazine, Asbury Park Press, KidSpirit, Spirituality and Practice, The Feminist Wire, and other publications. She has appeared in Voice of America, de Volkskrant, and Fusion Magazine. She is also a Congressional App Challenge winner for the app iVOTE. Lin currently resides in Corona, New York, and enjoys filmmaking and photography.

"I am so honored to be the 2017 New York City Youth Poet Laureate!” said Lin. “I am incredibly grateful to have a platform to inspire other youth voices, and to communicate the importance of self-expression through art and poetry."

The 2017 New York City Youth Poet Laureate Ambassadors were also announced at the event: Ta’Shea Parham of the Bronx and Keanna Hunter, Ianna Hayes and Khalin Vasquez of Brooklyn. The ambassadors will support Lin in reaching young voters through the 2017 citywide elections. 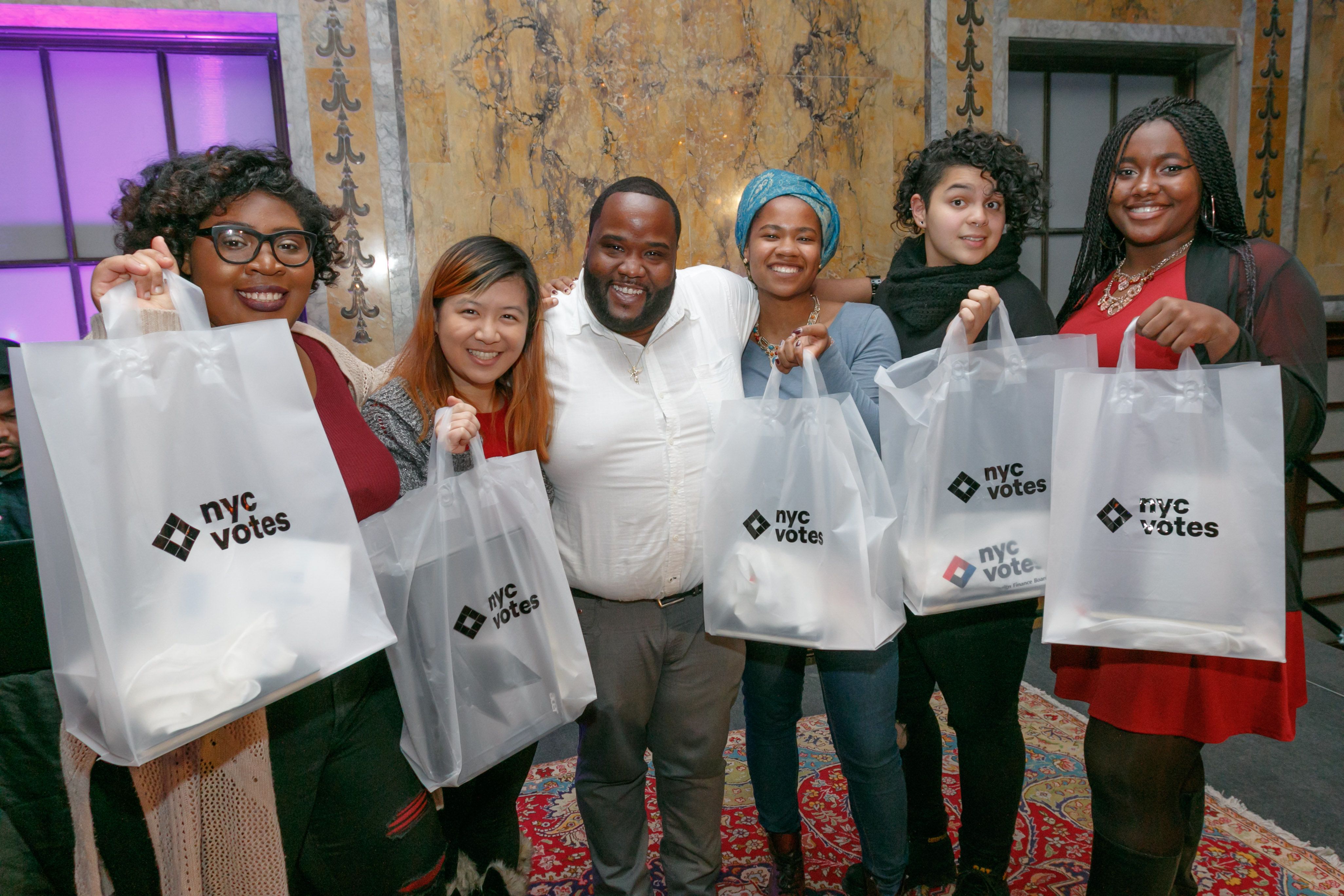 Photo: The 2017 New York City Youth Poet Laureate, Sharon Lin, poses with fellow YPL Ambassadors and CFB Youth Voter Coordinator Wil Childs. From L to R: Ianna Hayes, Sharon Lin,
Wil Childs, Keanna Hunter, Khalin Vasquez and Ta'Shea Parham. Photo by Chris Gill
“We are thrilled to introduce Sharon Lin as the 2017 Youth Poet Laureate,” said Onida Coward Mayers, director of voter assistance at the CFB. “She is clearly an accomplished and visionary young artist, leader and tech innovator. As an ambassador of civic engagement with NYC Votes, Sharon will work with our Youth Voter Coordinator Wil Childs to inspire her peers to lift their voting voices throughout the critical citywide elections of 2017. We look forward to witnessing her creative instinct in action as she encourages young people across the city to speak their minds and vote.”

“In this charged political season, the poets that touched the stage for the annual NYC Youth Poet Laureate Competition represented the beauty of our city's diversity and culture; not only did they bravely speak their truths, but they also reminded us what our democracy is about," said Michael Cirelli, executive director of Urban Word NYC. "I am hopeful that partnerships to support these important platforms will only elevate our dedication to the good and service of all New Yorkers.”

"It was an honor to host this year's Youth Poet Laureate competition at The New York Public Library. For an institution built to provide access to knowledge and education for all New Yorkers, it was especially powerful to witness fifteen young poets who are thinking critically about their world and using language to change it. Congratulations to Sharon Lin and all the competitors" said Miles Hodges of the New York Public Library.

"A Footnote on a Hollywood Blockbuster" by Sharon Lin

Tilda Swinton, your yellowface is not to blame
If Hollywood’s standards state that Natalie Dormer is
Japanese enough to play an Asian girl
If Scarlett Johansson in a black wig and contacts
Is enough to replace the thousands of Japanese
Americans interned away for your film
For the millions of Asian girls who never see themselves
Except as exotic sex toys on television
The first Chinese American woman elected to Congress
And the Senate both in the same year
Why have we waited so long?
Is it because you couldn’t give up your chow mein
Your Kung Pao Chicken and Egg Foo Young
Long enough to give us a chance to rise from
The firecracker ashes to give us a voice?
Is it because you prefer your petite Asian girls
In porn than in government, that our names are just
Too hard to pronounce?
Is that why you called the first Asian American
Miss America ugly, because she didn’t fit your
Sexual fantasies, wasn’t a China Doll
for your yellow fever?
Is that why Jeremy Lin made headlines simply because
You couldn’t believe that an Asian man could
Have anything but a small penis and small voice?
Is that why you call us a model minority, then
Slander our tiger parents when maybe
Your standards are just too damn low?
Is that why our girls are starved sick,
told that if they aren’t perfect then they are nothing?
Is that why I still get asked on the subway
Where I’m from, because being a first generation
American isn’t enough to show that I’m anything
More than fresh off the boat?
Is that why my almond eyes and yellow skin
Beg whether I speak English or Chinese?
Is that why we’re nothing but a monolithic sea of
Yellow, that everything we touch becomes Asian
American privilege, that our bamboo ceiling defines
Our place in society, that you can just ignore us
Because we’re too complacent to speak up?
Is that why you confine us to dumpling houses
Exile us to the slums of the city, and still sell
Your movies for China’s sweet, sweet yuan?
Is that why we can never find our kind
In a black and white society where we are simply
Another color of people?
Is that why you ignore that whole
Century of systematic lynching
Of rat tails and laundry cells
Of the railroad system that we build
But were never acknowledged for?
Is that why you wipe our history and blame
It on our silence, why you shred our past
And claim that we work too hard, that we
Steal jobs when our immigrants are working
Twenty hours a day to make a living
In a society that wants us out?
Is that why when we stand in solidarity
Against racism, we are shunned because
Being Asian means shutting up and taking
It in the ass?
Is that why you can’t find enough Asians
At poetry slams for inspiration, why we
Can’t be CEOs or heroes, because we’re
The ones who have to be saved?
Is that why you fear us, because you’re afraid
Our chink eyes will see right through your lies
That you know that our voices will rise
Like a dragon’s flame, that our 200 dialects
Will expose you, so you shove us to the ground
And bury us under centuries, till we’re nothing
But a footnote on a Hollywood blockbuster?

NYC Votes is the nonpartisan voter engagement campaign of the New York City Campaign Finance Board (CFB) and its Voter Assistance Advisory Committee (VAAC). In addition to promoting voter registration, participation, and civic engagement in New York City through its many programs and partnerships, NYC Votes sponsors the city's official Debate Program and produces the citywide Voter Guide.