Across the United States, unprecedented sums of money are flooding the electoral process, most of it coming from a few wealthy donors. But New York City’s matching funds program remains a central component of campaign fundraising that ensures that city candidates spend more time raising contributions from constituents than chasing special interest money.

The city’s program, which the New York Times describes as “one of the most progressive in the United States,” diminishes the role of big money contributions by amplifying small donations from average New Yorkers. Matching funds encourage candidates to raise money from their constituents – the residents of New York City – because only small-dollar contributions from city residents will be matched with public funds.

Our interactive contribution maps clearly illustrate the benefits of raising money through small donations. As the Times points out, these maps highlight how candidates for city offices raise money from nearly every corner of every neighborhood in all five boroughs.

During the six-month disclosure period ending in January, Bill de Blasio’s re-election campaign reported receiving contributions from 2,055 unique contributors who gave $175 or less – more than any other candidate in the period. This was followed by Justin Brannan, a candidate for City Council District 43, who reported 266 such contributors. Brannan tops all City Council candidates in his small donor fundraising efforts during the latest disclosure period.

The following table lists the candidates with the most small-donor contributions as of Statement 63:

For the entire election cycle, Mayor Bill de Blasio and Public Advocate Letitia James have reported the most small donors to date. De Blasio accumulated 2,579 donations from individuals who gave only $175 or less, while James has reported contributions from 441 donors.

The candidates listed above who have raised the highest percentage of their contributions from small donors are Richard David (undeclared) with nearly 70%, Justin Brannan with 37.6%and Carlina Rivera and Mary Silver (both in Council District 2) with 34%. Rivera also leads City Council candidates with the most small donors throughout the election cycle.

These results show that candidates are clearly prioritizing small city donors and donors from their districts. Overall, there are 34,741 individuals who gave an average donation of $475 to candidates in all city races, accumulating $16.5 million in total (for City Council seats the average donation is $221). The amount raised from individuals ($16.5 million) far outweighs contributions from committees, unions and other interest groups ($2.2 million).  This presents a stark contrast to state and federal elections, which lack small-dollar matching programs and where special interest contributions dominate.

As mandated in the City Charter, the CFB collects each campaign’s contributions and expenditures and releases this information to the public through the searchable database and the campaign finance summaries. The most recent disclosure period was Statement 6, which covers financial activity from July 12, 2016 to January 11, 2017. 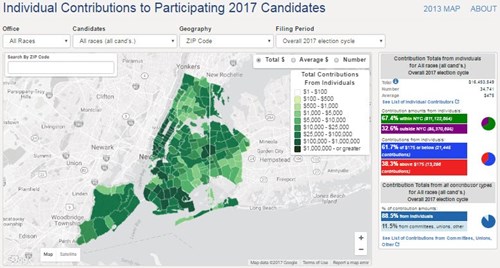 Additional research generously provided by Steve Romalewski of the Center for Urban Research at the CUNY Graduate Center.