Remembering Genevieve B. Earle, the First Woman to Serve on the NYC Council 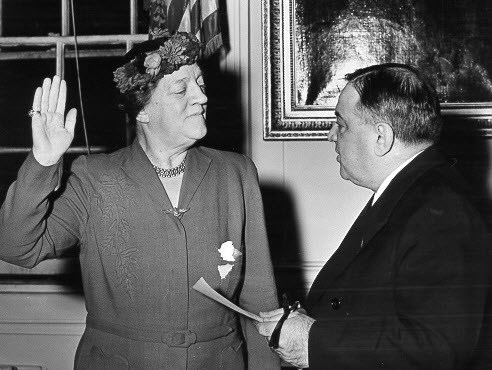 In honor of Women’s History Month, we celebrate a trailblazer in New York City politics who seems to have gone somewhat unrecognized in recent years. Genevieve B. Earle, a suffragist, business woman, civic advocate, social worker, and researcher, was also the first woman elected to the New York City Council in 1937. A self-described “independent Republican,” she represented her district in Brooklyn for five terms.

Earle had a distinguished record of public service even before joining the Council. From 1908 to 1913, she was a staff member of the Bureau of Municipal Research. A leader of the city’s suffragist movement, she helped found the Women’s City Club in 1916. She served on the City Board of Child Welfare in 1917, a mayoral Committee on Plan and Survey in 1926, and a gubernatorial Commission on Stabilization of Industry to Prevent Unemployment from 1930-31, among other civic engagements.

Most notably, Earle was the only woman member of the NYC Charter Revision Commission (1935-36). Dorothy Dunbar Bromley, a columnist at the World Telegram, wrote that Earle decided to run for Council in 1937 “not because she likes to feel important but because she would like to have a hand in implementing the City Charter she helped to prepare. She wants to save it from the Tammany boys who would change it, if they got half the chance, so that the voters wouldn’t be able to recognize it.”

Genevieve Earle also understood that the fight for good and effective local government “must be waged afresh each day.” Her words about the importance of being an “alert active citizen” and the effect that working to improve local government can have on society are just as true today as they were 80 years ago.

“Archimedes explained the principle of fulcrum by saying, ‘Show me the place to stand and I can move the world.’ To me, this place is city government; touch that and you touch the whole community. Thus the weight of a finger at the right place can set in motion forces that can create a wholesome, decent environment for all people and mold our way of living a little nearer to our heart’s desire,” said Earle.