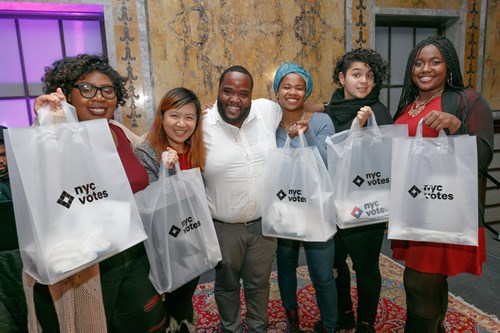 In addition to being awarded a platform from which to drive youthful civic engagement, the YPL is awarded a book deal through Urban Word NYC and a community service project of their choosing.

The YPL Grand Slam Finals took place on December 17, 2016, at the New York Public Library in the Celeste Bartos Forum. Past YPL competitions have seen striking performances through the years, while this year’s competitors were no exception. This year’s winner, Sharon Lin, became a clear frontrunner with her provocative poem, “A Footnote on a Hollywood Blockbuster,” which challenges racial stereotypes and sheds light on Lin’s own experience as an Asian American. 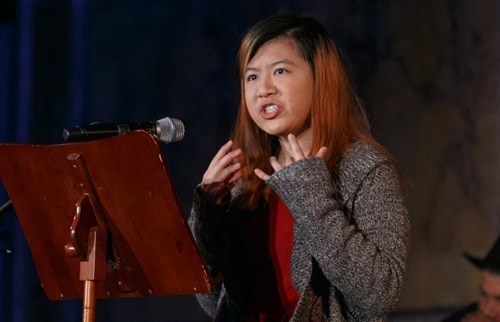 A full video of the Youth Poet Laureate Grand Slam Finals is available here. You can read more about Sharon’s accolades here, and you can watch her performances at the YPL Grand Slam here and here.

Sharon’s victory was also featured in the New York Daily News. We’ll be hearing a lot more from Sharon throughout the 2017 citywide election cycle. For now, we would like to introduce the equally talented and all-inspiring YPL Ambassadors: 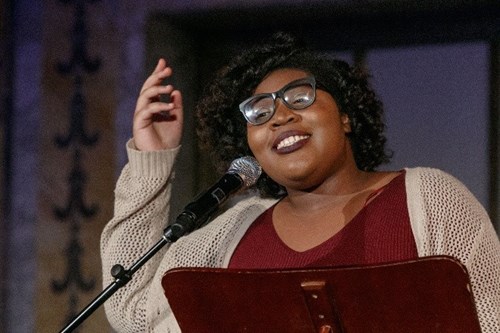 “I think it's important to encourage civic engagement and self-expression in our age group because as teens we are constantly told we don’t know anything or understand anything about the world and what's going on around us. This simply isn’t true. You’re never too young to have a purpose and if we expose more youth to self-expression, that can only benefit us.” – Ianna Hayes

Ianna is a 17-year-old student at the Academy for Young Writers high school in East New York, Brooklyn. She’s been playing the piano for 4 years and enjoys biking and knitting. In her artistic life, Ianna has been influenced by Crystal Valentine, a former Youth Poet Laureate, who inspires her constantly to keep working on her writing. Ianna is a very proactive individual in her school community. She is part of the senior planning committee, student council, the Gay-Straight Alliance club, and leader of her school’s Black Lives Matter club. Previously, Ianna was a finalist of Urban Word NYC’s poetry slam competition performing at the Apollo Theater. She intends to compete again this year.

You can watch Ianna perform her 1-minute voter poem at the 55:08 mark of this video. 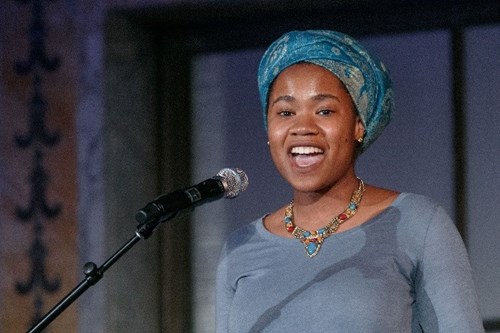 “Art touches people in a way nothing else can. It can gently push an audience to action, or jerk them awake to the realities of today. Above all else it gives them a connection to the subject and a sense of urgency they wouldn't normally have. Each time I step onto the stage and make eye contact with my audience, I know I have changed them for the better; all I hope is that others will do the same.

Aside from being a turning point in my life as a poet, it is also a turning point in my life as an activist. This time is one like no other, where people left and right feel unsafe in their skin and feel silenced by stifling bigotry. I was hopeless after hearing the results of the election. As a 17 year old young woman, I could not cast a vote towards our future, but I will be part of that future.” – Keanna Hunter

Keanna is a 17 year old senior from Brooklyn. She was part of the Poet-Linc program in 2015 and part of the Urban Word NYC 2016 Youth Board. Keanna is inspired to write by poets beaming with #blackgirlmagic like Crystal Valentine and Claudia Rankine and hopes to one day share the stage with them. When she isn't engulfed in her academics, Keanna can be seen performing in places like the Nuyorican Poetry Cafe, Lincoln Center, 92nd Street YMCA, and the Met. She is an avid activist and connoisseur of hip hop and cool jazz and aspires to inspire others.

You can watch Keanna perform her 1-minute voter poem at the 53:10 mark of this video. 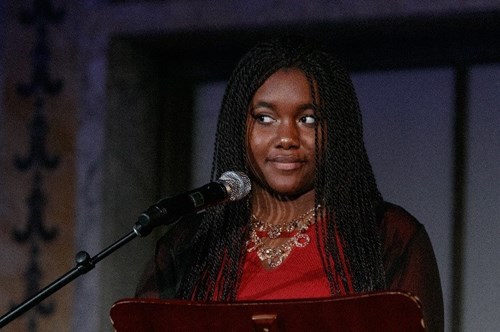 “I believe that now more than ever is the time for youth voices to be heard. Often times I feel like older generations or the media speak for us and our honest opinions and experiences are not heard. Through writing and poetry, we are able to fully express our unfiltered emotions. That to me is such a powerful thing. For those of us, including myself, who were not able to vote during this election, writing definitely allows us to still feel like we matter and that we can still make a change.” – Ta’Shea Parham

Ta’Shea is a student at Elisabeth Irwin High School. As a representative from the Bronx, Ta’Shea advocates for women who are victims of domestic violence.

You can watch Ta’Shea perform her 1-minute voter poem at the 44:31 mark of this video. 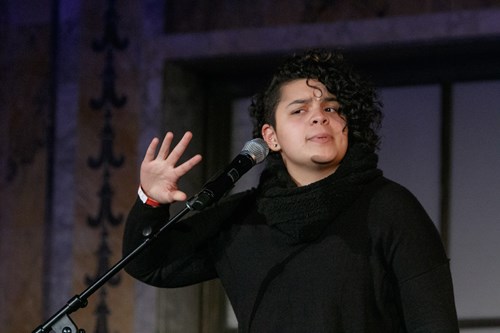 “As a queer, Latinx woman with Muslim parents, there are several obstacles this country has already stacked against me from birth. However, because I've been given the opportunity to engage in art, I can use it to inspire other voices like mine and create real, tangible change.” – Khalin Vasquez

Khalin is a Boriqua poet born and raised in Brooklyn.  She’s performed at the Library of Congress in Washington, D.C, as well as several well-known venues around NYC such as the Apollo Theatre, Nuyorican Poets Cafe, Lincoln Center, and many others. She was published in Lincoln Center’s 2015 Poet-Linc Anthology. As a member of the 2016 Urban Word NYC Youth Slam team, Khalin traveled to Washington, D.C. to represent New York City at the Brave New Voices International Poetry Slam. She wrote and performed her own one-woman show in the Journal2Journey program, in collaboration with Urban Word NYC, Hi-Arts NYC, and New York Live Arts. Khalin is currently a 2016-2017 Youth Poet Ambassador for New York City, and is a founder of the first ever Hunter College Slam team.

You can watch Khalin perform her 1-minute voter poem at the 1:10:48 mark of this video.