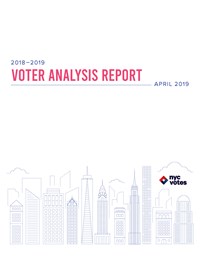 The 2018 election cycle and the first few months of 2019 were full of exciting news for voters and voting rights advocates alike. Voter turnout and registration rates among New Yorkers rose significantly in 2018 for the first time since 2002, with voters turning out in record-breaking numbers for one of the most dramatic midterm elections in recent memory. And, although New York usually underperforms in terms of voter turnout in comparison to the rest of the country, 11 neighborhoods of New York City actually surpassed the national rate of turnout in 2018.

In further encouraging news, voting better in New York will soon be a reality, due to a series of voting reforms that passed earlier this year, including: establishing an early voting period, consolidating primary election dates, automatically updating a voter’s registration when they move anywhere within the state, allowing 16- and 17-year-olds to preregister to vote, authorizing electronic poll books, and empowering the State Board of Elections to develop a system for online voter registration.

These voting reforms, while hugely important in removing long-standing barriers to the ballot box, are just the beginning. With a presidential election coming up in 2020, for which we anticipate historic turnout levels, we have the opportunity to make sure as many New Yorkers as possible are not only registered to vote but are also receiving information from us about the importance of voting in every election and showing up to cast their ballots. We urge you to join us in voting and encouraging your friends, family, and community members to get involved too. New York City is powered by voters like you, and we look forward to continuing to work with you to keep our democracy strong.

Check out our interactive maps to see how voter turnout looked throughout New York City in the 2018 primary and general elections, as well as the additional factors that impacted turnout in 2018.