Candidates were more likely to participate in the matching funds program in 2021. Nearly 94% of candidates on the primary ballot participated in the program, up from 84% in 2017. 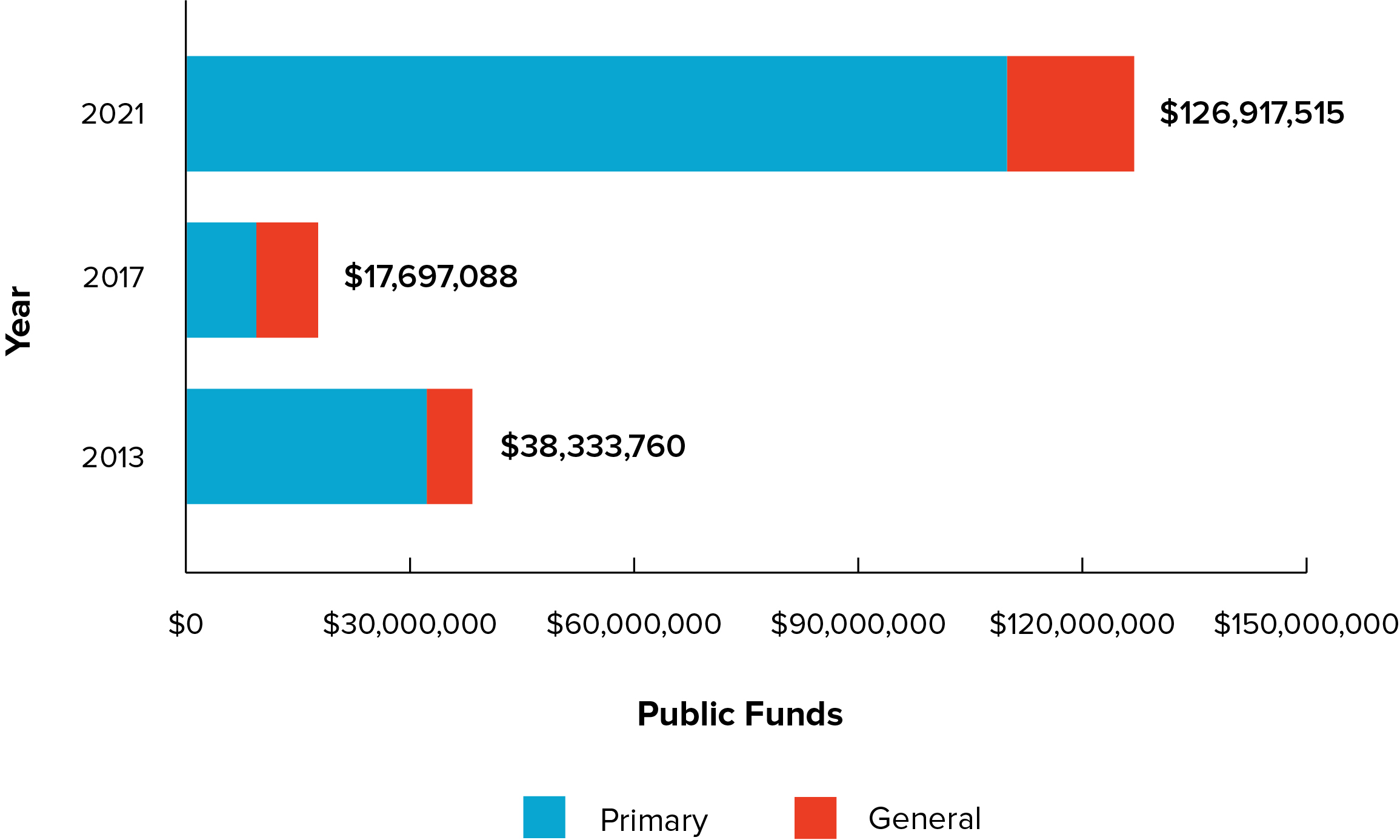 The increases in candidates qualifying for matching funds payments and the amounts paid out were driven primarily by changes to the law adopted since 2017. The 2017 Post Election Report (PER) recommended three changes to the matching funds program which were subsequently adopted by the 2018 Charter Revision Commission: to reduce contribution limits, to increase the matching rate candidates for citywide offices could receive for small contributions, and to increase the total amounts candidates could receive in matching funds payments. All three changes were overwhelmingly approved by voters via referendum in November 2018 and updated by the City Council in 2019.

The report compares candidates who received public matching funds payments for the first time to veteran candidates and finds that there is no clear advantage to being a program veteran:

NYC Votes Contribute, the one-of-a-kind application built by the CFB as a service for candidates, helped campaigns adjust to the massive disruptions to fundraising brought on by the COVID-19 pandemic. The Contribute app allows candidates to raise credit card contributions that meet CFB-specific requirements. This aligns with the CFB's goal to reduce barriers to running for office, particularly for women and candidates of color who face systemic challenges.

In 2021, credit card contributions accounted for more than 86% of individual contributions raised, far surpassing all other contribution methods. Nearly 94% of candidates used the Contribute app.

Spending by independent expenditure groups jumped significantly in 2021. Independent spenders shelled out $40.7 million, more than double the amount spent by outside groups during the 2013 city elections.

One of the most significant developments in the 2021 elections was the rise of single candidate independent expenditure groups. Entities created to support a single candidate have been increasingly common at the federal level. They have been less common in city elections, but the practice flourished in 2021. Single-candidate entities accounted for 77% of the independent spending in the mayoral race and 60% of spending overall.

Each of the top seven mayoral candidates by spending received support from a single-candidate. One group, New Start NYC, spent more during the Democratic primary ($6.5 million) than the candidate's campaign itself (Shaun Donovan - $4.9 million). As the Board noted during the election, single-candidate independent spenders pose a "particular challenge" to the goals of NYC's matching funds program.

This report includes two recommendations on how the State Legislature can change the state Election Law to enhance transparency and protect the integrity of our elections.

The post-election report traditionally includes extensive recommendations to ensure the Campaign Finance Act continues to adapt to changes in how money is raised and spent in elections. However, due to the significant changes to the program for 2021, along with the introduction of Ranked Choice Voting and disruptions to campaigning caused by the COVID-19 pandemic, it is prudent to wait for data from the 2023 and 2025 elections before proposing further modifications to the city's campaign finance law.