990,776 Reasons Why We Need Universal Registration

Voter turnout in New York City hit a historic low last November when only 25% of registered voters cast a ballot.

Turnout for midterm elections is always lower than for presidential elections. Still, this was a remarkably poor turnout rate for an election to select New York’s governor and Congressional and state legislative representatives.

There is no escaping the dismal statistics, as these interactive maps demonstrate. Districts with the lowest participation rates, such as Assembly Districts 49 and 54 in Brooklyn, had turnout rates of only 16 percent.

Even in areas with the highest participation, more voters stayed home than cast a ballot. This was the case in Manhattan’s Assembly Districts 67, 69, and 76, where just 34 percent of registered voters made it to the polls.

Some have suggested that using registered voters as the denominator to calculate turnout rates overstates the problem since the voter rolls include people who have moved, died or are no longer eligible to vote for other reasons. To be sure, under federal law, the Board of Elections may only remove inactive voters from the rolls once they have failed to cast a ballot in two consecutive federal election cycles. So, it is true that the turnout among registered voters who are eligible to vote is likely higher.

However, what happens to turnout statistics if we take into account New York City’s low voter registration rate?

New York has a citizen voting age population (CVAP) of 5,142,067, according to population estimates from 2013, the most recent Census data available. But only 4,151,291 people were on the voter rolls in time for the 2014 election. Even assuming that every person currently on the voter roll is eligible to vote, 19 percent of New York City’s voting-age citizens are not registered. The registration rates vary widely by borough, with as few as 77% of the eligible population registered in Queens, compared to 84% registered in Brooklyn.

This means that the turnout rate among voting-age citizens in 2014 was barely above 20%.

With only one-in-five voting-age citizens turning out to decide the 2014 elections, it’s hard to overstate the severity of the voter participation crisis in our city. 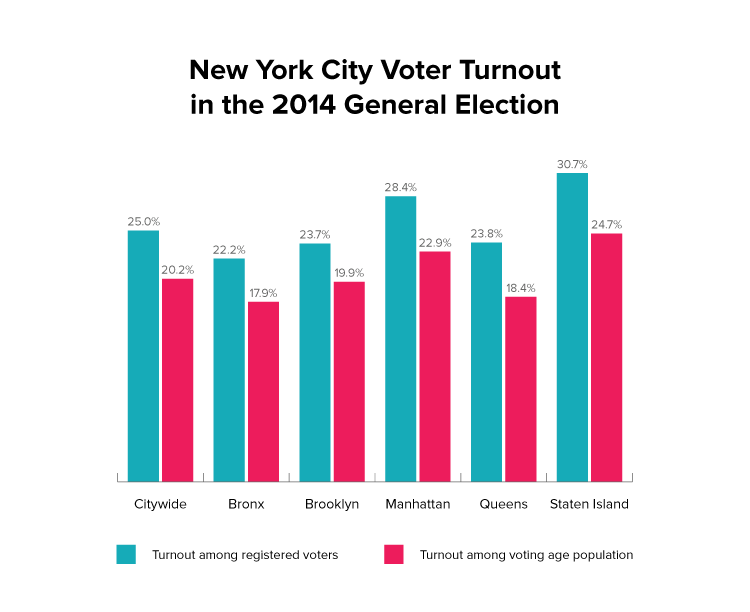