NYC Votes and CUNY Votes are hosting an intensive summit on Friday, February 21, centered around student voter engagement and organizing ahead of the presidential election this year. The summit will also kick off the new NYC Votes x CUNY "Pledge to Vote" campaign, which enables student to pledge to vote in 2020 by sending a text. NYC Votes and CUNY are working together to double youth voter turnout in New York City in 2020 and 2021.

Students and campus leaders from all CUNY schools are invited to participate in a day of speakers, workshops, and breakout sessions on organizing skills, adaptive leadership, issues-based organizing, voting rights, and more. Featured speakers will include lawyer and CUNY professor Frank Deale, as well as guests from NYPIRG and the Roosevelt Institute.

When: Friday, February 21, 10 am - 3 pm
Where: Borough of Manhattan Community College
199 Chambers Street

Students interested in participating in the summit should RSVP by visiting nycvotes.nyccfb.info/cuny_summit 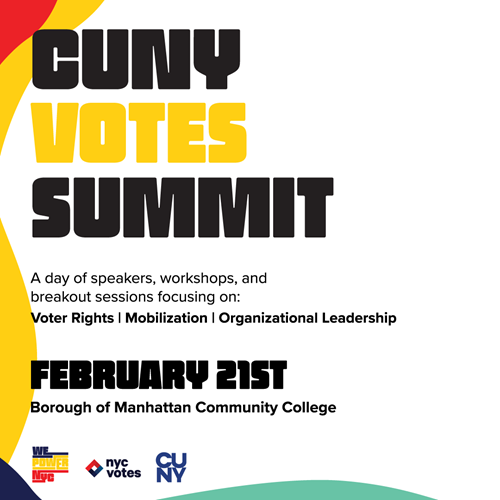